for logical and other competitions

Allowed delay no limits, and every minute of delay reduces score to 2 points. For the correct solution of all tasks (answers), you will be obtaining with bonus: 1 point for each unused minutes.

Results contestants must sent with a Answering Form.

Answer Format: Each Sudoku has two marked rows. You need submit all digits in the corresponding directions, from left to right. Please write solutions without using commas, dashes or “Enter”. Use only one space (eg: 123456789  987654321).

* The timer on site is only for your information, and crucial time is sending of Form 1 and Form 2. 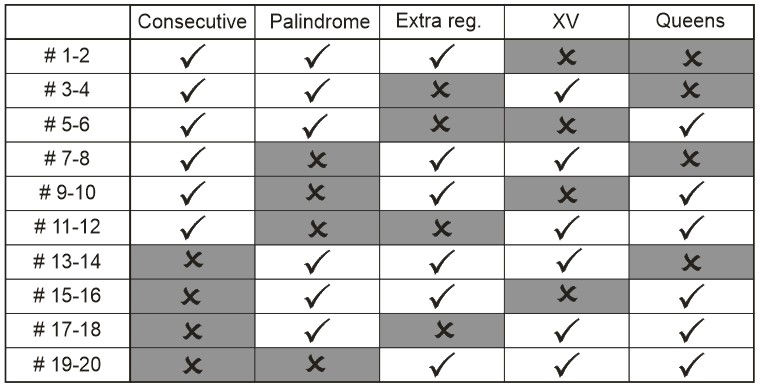 The rules for classic sudoku apply.

Consecutive Sudoku: Each dot separates two consecutive numbers. All such positions are marked,
Palindrome Sudoku: The digits in the squares with the grey line form palindromes, i.e. they read the same from both the directions,
Extra regions: Each group of nine shaded cells must also contain the numbers 1 to 9,
XV Sudoku: The letters X and V separate numbers whose sum is 10 and 5, respectively. All such positions are marked,
Queen Sudoku: Each number 9 in the grid is a chess Queen. Two Queens cannot be placed along the same row, column or diagonal of any length.